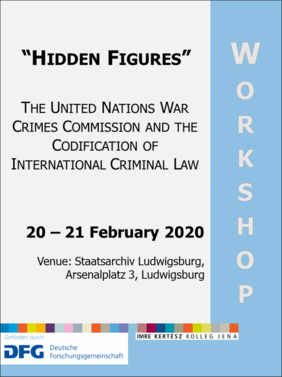 This workshop is part of the research project "Tribunale. Kriegsverbrechenprozesse im sozialistischen Jugoslawien", which is funded by the Deutsche Forschungemeinschaft (DFG).

“Crimes against peace” and “crimes against humanity” are undoubtedly two elements of crime, which have acquired enormous resonance in the legal and moral discussions in the aftermath of the WWII. They are often associated with the International Military Tribunal and the person of the American chief prosecutor at Nuremberg, Robert Jackson, who was also the head of the American delegation to the London Conference. It is a fact, frequently overlooked, that the United Nations War Crimes Commission (UNWCC) paved the way for the London Charter. Seventeen of the Allied nations established the UNWCC in October 1943, including the European then still occupied countries France and Poland but also New Zeeland and China, the only Non-Western independent nation. Its main function was to formulate and implement general measures for trial and punishment of alleged Axis war criminals.
Most of the Representatives in the UNWCC took part in the predecessor’s semi-official committees: the International Commission for Penal Reconstruction& Development and the London International Assembly (LIA). However, the list of Representatives, who drew from their experience in the League of Nations is also very long and include the Australian representative Stanley Melbourne Bruce, the Chinese representative Wellington Koo or the French representative Rene Samuel Cassin.
It was the occupied countries and their governments-in-exile, which strongly pushed the issuance of war crimes punishment. Among them Czechoslovakia and Belgium were some of the most active. Their representatives to the UNWCC, Bohuslav Ečer and Marcel de Baer, advocated strongly for the establishment of an international tribunal to prosecute war criminals and for a new interpretation of war crimes. Their approaches didn`t always meet the approval of all members of the Commission, but they were almost certain that the other Representatives of the occupied countries would accept their opinions and support their claims, as they assumed the Chinese representative, Wellington Koo would, too.
To the legal experts of the governments-in-exile and to the other non-European states the participation in the UNWCC represented a rare chance to influence the prosecution of war crimes and bring in their concepts of a law of war. The results of their work were the guideline for drafting the legal framework of the London Charter. This workshop thus aims to address the “hidden figures” in the various circles and commissions, and look into biographical backgrounds as well as the “national mission” of the members.
Who were the representatives to the Commission? How did they participate in the development of the concepts of “crimes against the war” and “crimes against humanity”? How were ‘networks’ of legal experts formed, and how did they cooperate? Did experience in previous committees, for example the League of Nations at Geneva, matter for these networks or their workflow? How did their war experience shape their motivations to develop a legal punishment of war criminals? Moreover, how did the engagement in the UNWCC influence the work within their national War Crimes Commissions?
The workshop will explore these questions focusing on different actors operating in diverse contexts (League of Nations, Governments-in-exile, Non-European governments, occupied states) in order to reassess the impact of the UNWCC on the Codification of the international criminal law and to highlight the connections between the actors, international and national concepts and policies. The workshop focusses on the networks built through legal institutions and investigate the flows of legal concepts from the League of Nations to the United Nations General Assembly.