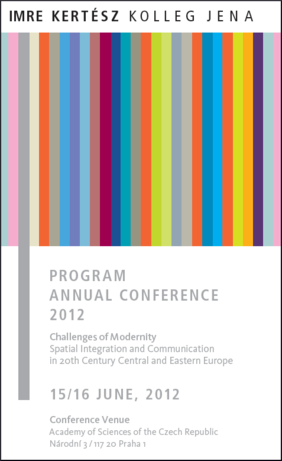 in cooperation with the Charles University Prague

The aim of the conference is to analyze the relationship between modernization, communication and integration. We want to discuss different aspects of these phenomena in four chronologically structured sections (before 1914, 1918-1939, 1945-1989 and after 1989). The subject of our analysis is Central and Eastern Europe including the western part of Russia. The conference will focus on important changes and key developments in everyday life of four generations. These changes will be discussed in both imperial and national contexts and within the rural-urban dichotomy while, at the same time, questioning the validity of these categories. Different concepts of "modernity" and "modernization", the time-space compression caused by technological advances, the relationship between urban and rural areas and the specific forms of state-socialist urbanization will be central themes of the conference. On the concluding panel historians will discuss with other social scientists the post 1989 social and economic integration and disintegration with particular emphasis on their historical roots. The conference in Prague is the first Annual Conference of the Imre Kertész Kolleg Jena, held in alternating cities in East Central and Southeastern Europe.