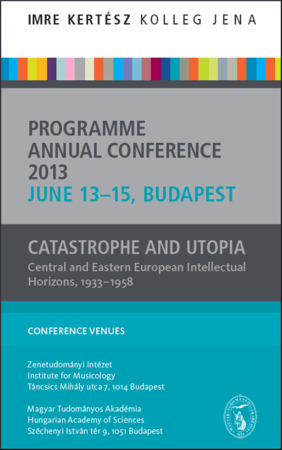 The conference Catastrophe and Utopia will study the historical experiences, intellectual agendas, sustained reflections and utopian visions of Central and Eastern European intellectuals in the years between 1933 and 1958. Central and Eastern Europe was the central stage of the most catastrophic events during this quarter of a century, experiencing the rise and spread of Nazism, the Second World War and the Holocaust as well as the establishment of Stalinist regimes, political terror and extreme social transformation that gradually led to de-Stalinization and resulted in the first major challenges against Soviet-type regimes. Central and Eastern European intellectuals were not only engaged observers but also active participants in these unprecedented upheavals of modernity, designing strategies of support, collaboration, accommodation, resistance and opposition. The major aim of the conference is to integrate the study of the massive and varied transformations over this quarter of a century and analyze intellectual continuities and discontinuities in a comparative and transnational manner.