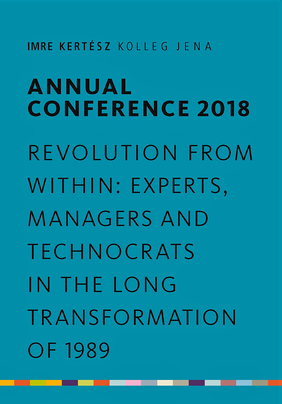 Revolution from Within. Experts, Managers and Technocrats in the Long Transformation of 1989

"The expression of truth is losing its ethical impact and becoming no more than a historical fact that arouses interest but not enthusiasm. And the experts are better informed and are able to quote facts more accurately than the dissidents" wrote Jiřina Šiklová, a Czech dissident sociologist, in January 1990. Already a few months earlier she had predicted that it would be the professionals and experts from the „grey zone“ between official Party structures and dissident circles, who would necessarily play a major role in rebuilding of the political and economic life after the democratic revolution. Her words were prophetic, yet the „revolution of experts“ remained, for long, in the shadow of the great anti-totalitarian master narrative of 1989 that has dominated historical imaginary both in East and West.

It is this aspect not only of the 1989 revolutions, but of the entire “long transformation” lasting at least from the 1970s until the early 2000s that is at the heart of the conference. Its main aim is to historicize today’s academic as well as political discussions concerning the alleged neo-liberal hegemony which replaced the state socialist regimes after their collapse. The system described as “neo-liberal governance” was made possible not only by imported Western political and cultural patterns, but also by a number of intellectual, mental and socio-cultural continuities from late State Socialism. Experts not only paved the way for the adoption of new policies and analytical frameworks, but also played a crucial role in adapting them to local circumstances - with varying degrees of success.

For the conference we invited scholars, who advance research on the “long transformation” and highlight two topics increasingly prominent in historical research today: First, expert cultures and technocratic governance during late State Socialism and early Post-Socialism; second, the experts, managers, technocrats and their transnational networks and epistemic communities as prominent - though less visible - actors of the liberal (democratic) revolutions of 1989 in East Central Europe. It is our intention to provide an overview, as broad as possible, of different approaches and research perspectives in the given area of study.

Combining perspectives of intellectual and conceptual history, social history of expert cultures, new institutionalist studies, cultural anthropology, history of sciences etc., the focus of the conference is on the creation of expert knowledge, its political implications as well as direct influences during late State Socialism and the liberal democratic regimes after 1989. It concentrates on concepts of social management and social control formulated by scientists and experts, political applications of expert knowledge, and interactions between the technocratic, managerial and expert elites, both at home and internationally, as well as the entanglements of political rule and scientific knowledge and expert skills in dynamically changing social contexts.

Please click here for the final programme and the poster of our 2018 conference.