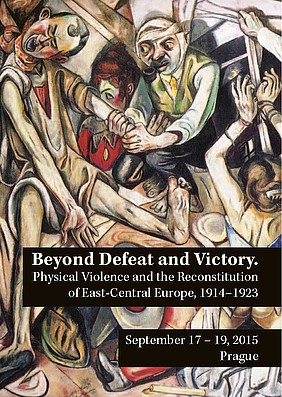 Beyond Defeat and Victory

Physical Violence and the Reconstitution of East-Central Europe, 1914–1923

Violence during and in the immediate aftermath of the First World War is a frequent research topic pursued in various contexts and within the framework of different methodological approaches. However, culturally inspired analyses as well as expansions of the horizon beyond the boundaries of a particular nation-state have been rare. Moreover, almost all the existing scholarship focuses on those states in East-Central Europe that emerged from the wartime collapse as defeated. The other side of the fall and reconstruction of East-Central Europe at the turn of 1910s and 1920s that did not originate from the “culture of defeat,” but rather from the opposite “culture of victory,” has been missed. The conference “Beyond Defeat and Victory: Physical Violence and the Reconstitution of East-Central Europe, 1914–1923” seeks to fill this gaps in international scholarship by exploring the possibilities in comparing the role of physical violence in the two distinct social environments formed by the “culture of victory” and “culture of defeat” in East-Central Europe during and after World War I.