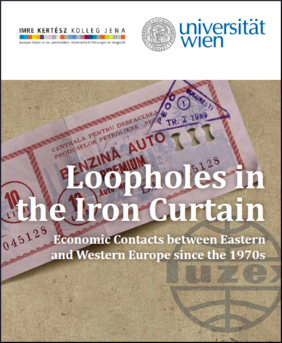 Loopholes in the Iron Curtain

Loopholes in the Iron Curtain

Economic Contacts between Eastern and Western Europe since the 1970s

The history of the Cold War has been, as the name suggests, predominantly narrated as a history of conflicts, confrontation, and competition. At the same time, the economic relations between Eastern and Western Europe since the 1970s tell a different story: The contacts and cooperation between companies and individuals in East and West developed dynamically throughout the late Cold War period.
While the trade relations with the “Eastern Bloc” were of secondary importance for the West European economies until 1989, the inefficient planned economies were increasingly dependent on transfers of technology and eventually of capital. The interests in and experiences with the asymmetrical economic relations on both sides have been researched only marginally, although they contributed to the détente and created trust between East and West, which in turn played an important role for ending the Cold War in Europe.
Two levels of economic interactions will be at the center of attention: The first papers deal with official economic relations, which were generally based on bilateral contracts. The presentations cover companies and their eastern contacts in several larger West European economies (such as Germany, Italy, or Great Britain) as well as smaller states such as Austria. The following presentations deal with economic fields that tend to be overlooked in economic history, such as retail trade, smuggling, or tourism as a form of small trade. The economic contacts “from below” also include different places of economic exchange such as trade fairs, border regions or tourist destinations such as Vienna.

Please find a conference report by Sarah Lemme on the HSozKult website.