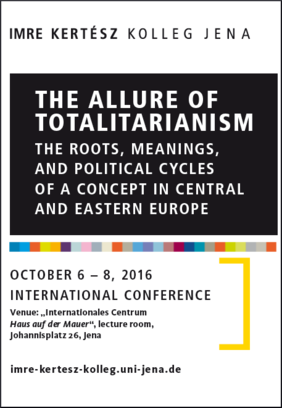 The Allure of Totalitarianism

The Allure of Totalitarianism. The Roots, Meanings, and Political Cycles of a Concept in Central and Eastern Europe

The term ‘totalitarianism’ has experienced a remarkable comeback in political, historical, and social science discourses of the last half century. Having served as a key concept in the dissident critique of state socialist regimes in Central and Eastern Europe during the 1970s and 1980s, the term took on new life after 1989, losing its associations with the opposition and becoming widespread in the media and public sphere – alongside ‘nation’ and ‘the return to Europe’ – as part of a vocabulary used to legitimize the new system.
This has been codified, too, with the terms ‘totalitarianism’ and ‘totalitarian’ being integrated into new laws and appearing in the names of state-funded institutions. Finally, in the new millennium, new meanings – half-derogatory, half-ironic – have emerged. The term has been adopted, for instance, by some civil rights organizations as a label for criticizing the mass surveillance of citizens as practiced by both state and commercial entities (i.e. ‘chip totalitarianism’). In the international arena the term is used increasingly to criticize the global spread of religious fundamentalisms; and in the form of ‘inverted totalitarianism’ it is regularly directed at the ‘managed democracies’ at home.
This conference aims to investigate the roots, meanings, and political cycles of the concept of totalitarianism, one of the most contested intellectual concepts in the twentieth and twenty-first centur