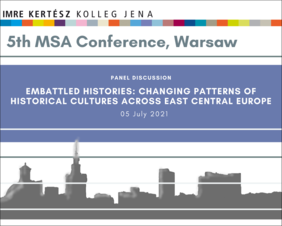 Ten years ago we launched the Cultures of History Forum here at the Imre Kertész Kolleg. To celebrate this anniversary, we successfully proposed a panel for the MSA 5th Annual Conference on:
“Embattled Histories: Changing Patterns of Historical Cultures Across East-Central Europe”.

On 5 July Zoltan Dujisin, James Mark, Ana Milosevic and Dariusz Stola discuss with Eva-Clarita Pettai and Joanna Wawrzyniak about evolving historical cultures and changing patterns of public memory and historical debate in East-Central Europe.
In a first step, we will ask roundtable participants to give a brief statement in which they reflect on the evolution of historical cultures and debates based on the Forum publications. In a second step, the discussion will then engage in broader comparative reflections, identify cross-regional patterns and explore the transnational convergences of ideas and practices regarding historical truth and justice, commemoration and the processes of historical knowledge creation.

History remains a highly contested issue across the East Central European region. An open and diversified public discourse and the free interaction between producers and consumers of historical culture remain an embattled public good. Over the past decade, it has been increasingly challenged by economic and administrative constrains, but most of all by ideological and legislative interventions that aimed at determining what people can learn about, and how they make sense of historical legacies and meanings. Yet, thirty years after the end of state socialism, the region is by no means a monolithic bloc in this context. Divergences in the way that controversial issues of the past a being addressed in public not only emerge between states and governments, but also between regions and between different strata of society. Differences between more liberally minded bigger cities and more national-conservative rural areas also manifest themselves in public discourses over historical figures and memories.

With our online platform Cultures of History Forum we followed and critically reflected on these processes over the past ten years across the former socialist region. The majority of our authors have come from the region itself; they reported on, contextualized and analysed concrete public debates and incidents of narrative contestation, they zoomed in on new museum exhibitions and discussed attempts to visualize and (re)present the past in the public realm. Since 2017, the Forum also provides a platform for authors to critically analyse government policies and legislation as well as judicial procedures that address (and reign in on) matters of commemoration and history.