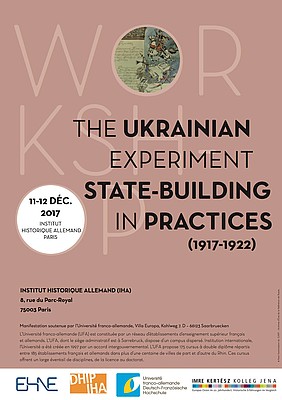 The Ukrainian Experiment: State-Building in Practices (1917-1922)

Workshop of LabEx-EHNE Paris, the GHI in Paris and the Imre Kertész Kolleg Jena

The Ukrainian experiment between 1917 and 1922 is a paramount example of state-building in practices under the conditions of war and civil war. It produced a variety of ephemeral state structures: an « All-Ukrainian » Central Council ( Rada), a People’s Republic, a People’s Republi cof Soviets, a Ukrainian Puppet State (Hetmanate) at the mercy of the Central Powers, and a Ukrainian government-in-exile in Paris. In the end, Warsaw and Moscow bluntly divided Ukraine between them, incorporating the western part (the former Austrian province of Galicia) into the Polish Second Republic and the eastern part into Bolshevik Russia. The workshop will question the traditional view of state-building in the wake of the Great War as pursued by either nationalist or socialist zealots. It rather will shed light on the grey zone of negotiation, cooperation, and interdependence of these two major movements of the times. Our choice is to focus less on political or military leaders and more on the bureaucratic elites which were charged to put the theory of state building into practice.

Parts of the workshop are funded by the Université franco-allemande, we are very grateful for their support.