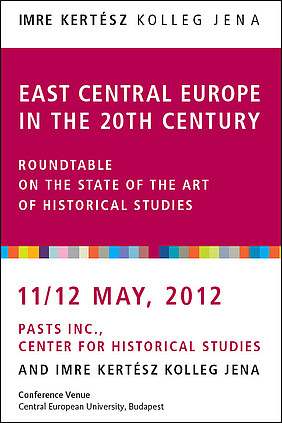 Roundtable on the State of the Art of Historical Studies

In cooperation with Pasts, Inc. Center for Historical Studies at the Central European University

East Central Europe in the 20th Century. Roundtable on the State of the Art of Historical Studies is meant to serve two interrelated purposes. First, it is called to foster reflection and dialogue on the state of the art and potential future direction of historical research dealing with East Central Europe in the 20th century. Therefore, a number of scholars with substantial contributions to the most dynamic thematic subfields are invited to share their scholarly insights and personal experiences while some of the leading scholars dealing with the history of East Central Europe are kindly asked to serve as commentators. Second, the roundtable is organized to better acquaint internationally oriented scholars dealing with this multifaceted region with each other and provide a forum where new agendas can be formulated. Specific subjects shall be discussed in individual panels ranging from alternative approaches to the study of the region, such as the comparative, the transnational and the entangled, different spatial conceptualizations and uses of regional studies in various localities through diverging and conflicting national interpretations to the study of dictatorships and their remembrance to the challenge of integrating non-mainstream themes and actors into mainstream national and regional historiographies (please see below). Individual presentations shall last no longer than fifteen to twenty minutes and will be commented upon by distinguished scholars. All panels will include extended discussions.
The discussions shall draw on in-depth studies of recent historiography published in volumes such as (Re)Writing History: Historiography in Southeast Europe after Socialism edited by Ulf Brunnbauer, Narratives Unbound: Historical Studies in Post-Communist Eastern Europe edited by Sorin Antohi, Balázs Trencsényi, and Péter Apor, well as on the recent all-European projects on modern historiography such as the volumes in the Writing the Nation series edited by Stefan Berger, Christoph Conrad and Guy P. Marchal.