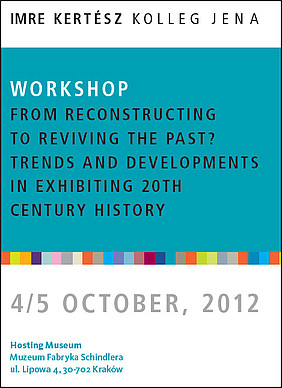 From Reconstructing to Reviving the Past?

Workshop: From Reconstructing to Reviving the Past?

In cooperation with the Museum Fabryka Schindlera in Cracow (Hosting Museum)

The central aim of the first workshop in Cracow is to reconstruct and to discuss fundamental developments in historical museums and the presentation of history in exhibitions both in Western and East Central Europe. Our underlying assumption is that there are more things in common than would be visible at first glance. The challenge to rescue exhibitions and museums from their existence as temples of the fine arts or socialist exhibition grounds posed very similar questions to practitioners in Western Europe (after ca. 1970) and in Eastern Europe after 1989: What are the possibilities inherent in exhibitions to make history accessible to new groups of visitors? How can they minimize the distance between visitors and the historical narrative? How can museums become places of "historical education"?
Apart from these fundamental questions and independent of theoretical discussions, a great variety of new forms of communicating with visitors became prominent due to new media usage. Central to the new beginnings in museums in Western Europe in the 1970s and in Eastern Europe in the 1990s appears to be the question which type of museum became a thing of the past, and which new methodological, aesthetic, and technological concepts and approaches were put into practice.
Today, a new type of historical exhibition can be seen in the whole of Europe in which history is staged as a contemporary and direct experience - as an event attempting to involve the visitor in a direct fashion.