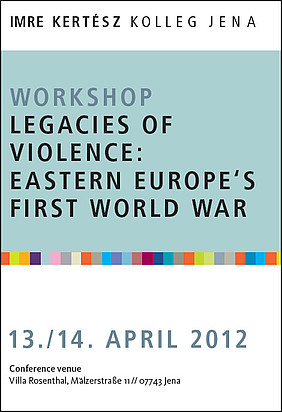 The workshop is dedicated to Eastern and Central Eastern Europe as a region and the First World War as central event, including its immediate preludes and aftermaths. Within that framework, it focuses on the tradition of violent rule, behavior and thought.

Section One (A World in Transition) discusses the impact of the reign and the downfall of Empires on the one hand, the rise of national movements on the other hand on the formation of regional and trans-regional conflicts. Section Two (Occupation Plans and Practices) asks where violent concepts - forms of administrational or economic domination as well as immediate physical violence - came from, how they were applied during the war, where they were intended to lead to in the plans of the occupation powers and how they in reality affected postwar rule in the areas under survey. Section Three (Radicalizations) is dedicated to the development of violent thought alongside the First World War in Eastern and Central Europe, the rise of left and right political extremism - the Bolshevik revolution and the evolving fascist and authoritarian regimes - as well as the theoretical and practical exclusion of groups regarded as alien to once own society, as mirrored in the increase of a widespread anti-Semitism and the development of concepts of "cleaning" whole landscapes from "undesirable elements".
The workshop will bring together scholars from Europe, the USA, and Canada in order to examine short-term and long-term legacies of violence in Eastern Europe's First World War. Through comparative discussion organized around themed subject sections, the symposium will help to develop a transnational analysis of the ramifications of the First World War in Eastern and Central Eastern Europe.

The results of the workshop were published in 2014 in Vol. 3 of the Imre Kertész Kollegs series of monographs.