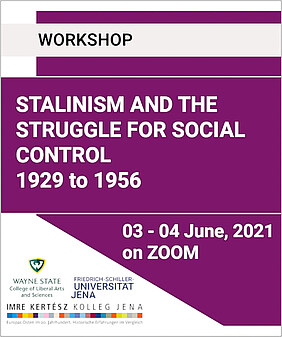 Workshop: Stalinism and the Struggle for Social Control: 1929 to 1956

joint workshop of the Chair for Eastern European History at the University of Jena, the College of Liberal Arts & Sciences at Wayne State University and the Imre Kertész Kolleg, Jena

To register, please write an e-mail to Immo.Rebitschek@uni-jena.de.

This workshop builds on, and challenges, the scholarship on the response to social disorder under Stalin by examining social control more broadly. Police purges were a massive response to social disorder, yet the question of social control was not limited to the police. In the same decade of the purges, courts and prosecutors were processing millions of cases. From a law criminalizing abortion to passport regulations, criminal and civil proceedings were important for the implementation of social norms. Unlike the police, the justice system was designed to control and not to cleanse society. Enforcing order on the basis of codified norms, legal organs complemented (and often challenged) the police operations and its pre-emptive and unchecked strikes against social target groups. Social control did not just come from above.  “Stalinist subjects” themselves made legal claims based on their own social interests. People sued for alimony, divorce or damages, and initiated criminal cases on their own behalf. After the war, methods of legal repression seemed to supersede the regular police in the field of social control through legal campaigns, while more and more people made appeals to the courts.

Social control in the Soviet Union was not entirely about the “state” putting its vision into practice. The social was a battleground for many participants using state and state-sponsored channels to enforce their wills and interests within the setting of social conflict. The enforcement of social norms and the response to their violations were in the hands of multiple agents. This view does not only challenge the dualistic interpretation of a state forging societies at will, it challenges the perception of monolithic state agency and puts emphasis on individual latitudes in bureaucratic structures. The workshop aims to re-examine the question of social control against the backdrop of institutional rivalries and bureaucratic spaces in Stalinist and post-Stalinist Russia. It seeks to debate the important role of the people who were both oppressed by the laws and used them to better their lives.

The workshop aims to develop the scholarship on social policy and social conflict based on new scholarly research. It will focus on the Soviet secret police and the justice system as well as social mobilization through party and state sponsored structures. We want to draw attention to patterns and relations of agency in a dictatorship and thus pose the major question of control over social relations and the establishment of social norms. How did visions of social engineering evolve and to what extent did they fail over the ambiguity of agency? Tackling these questions could help to understand not only how the Soviet state was operating (and struggling) through different spheres of agency but how it evolved into a post-Stalinist regime and who contributed to this evolution.