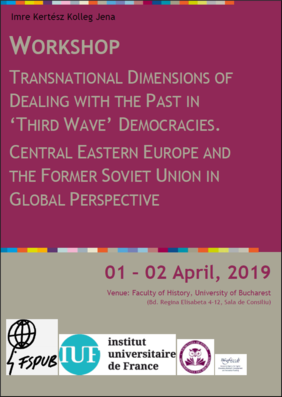 Workshop: Transnational Dimensions of Dealing with the Past in ‘Third Wave’ Democracies

The scholarship on reckoning with the past after the “third wave of democratisation” has generally provided analysis of national case studies or comparative accounts of countries seen as discrete units, disconnected from transnational or international developments. This approach has overlooked the impact of globalization of memory cultures on national settings as well as the multiplicity of cross-borders and cross-regional entanglements that have framed justice and memory processes since the 1970s.

This conference examines the transnational dimensions of dealing with the past in post-1989 Central Eastern Europe and the former Soviet Union. It focuses on transnational activism, transfers of knowledge and expertise at bilateral, regional or international levels, and the role of international organizations and NGOs in reckoning with mass violence. The conference explores the circulation of ideas within these regions, as well the way memorialization practices in Eastern Europe and the former Soviet Union were shaped by and influenced in turn criminalization discourses in other geographical contexts (Latin America, Asia, Africa).